Analysis of Solar PV installation figures vs the FIT budget

Dec 22 Posted by Guest in Feed In Tariff 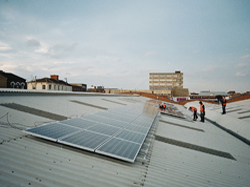 With the latest DECC figures showing over 800MWp of installed solar PV capacity in the UK, Leeds Solar have been analysing the latest figures to see what the impact of this level of installed capacity will have on the treasury imposed FIT budget cap for 2012-13.

Analysis of UK Installed Solar PV Capacity as of 21/12/2011, and the total payments due for this installed capacity alone in 2012-13

The Total Feed In Tariff budget for 2012-13 is currently set at £161 million, so with £270.5 million of payments already due for just the solar PV systems installed up to this point the Feed In Tariff scheme looks set to be £109.5 million over budget in 2012-13 based on the current installed capacity alone.

We estimate that the solar PV industry should add at least the same capacity of solar PV in 2012 as it has in 2011 even with the planned FIT rate cuts, which means that the FIT budget for 2012 looks set to be at least double the level the treasury capped the FIT scheme at for 2012-13. This is without taking into account other micro renewables such as wind, hydro etc.

We therefore call on the government to urgently review not only the FIT rate (as it is doing), but also the actual cap that the treasury imposed on the scheme last year. It's clear that there is no possibility of the FIT scheme staying within these spending limit, and the government must now face reality and increase those limits.

If the limits are increased, Leeds Solar and the rest of the industry don't have a problem with ongoing FIT rate reductions to reflect the cost reductions occuring within the industry, but we can only cope with this if we can continue to benefit from economies of scale that can only happen if the industry is allowed to continue to expand.

It's time for this government to make a decision, as the greenest government ever, are you going to be responsible for throttling the solar PV industry at birth, and in so doing ensuring that the cost of PV remains high, or supporting its ongoing growth while driving costs down?

If the government chooses the 2nd option, then at the rate of installations we've seen in the last 4 months we could easily see 15-20GWp of solar PV installed by 2020 in the UK, and if the level of cost reductions are allowed to continue then there's no reason why solar PV can't become cost competitive with wind, nuclear and even fossil fuels well before then (given the rate that fossil fuel prices are increasing, and North Sea production is reducing)