Jan 19 Posted by Guest in Uncategorized 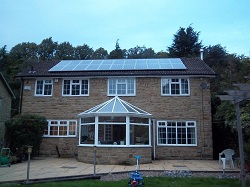 *Please note this is an old blog post from the start of 2012, but seems to be getting a lot of hits still - the information is now a year out of date, please ignore it*

DECC have announced their plan B for the Feed In Tariff scheme if, as seems likely, they lose their current High Court appeal against the ruling before Christmas that the original 12th December cut off date for the 43.3p FIT rate for solar PV to be changed to 21p was illegal.

A brief overview of the situation as Leeds Solar see it

As we predicted, the government lost it's appeal in the High Court, however the Government has since announced it's intention to appeal again to the Supreme Court. The Supreme Court have stated that they are unlikely to be able to rule on this appeal for several months, certainly not until after 3rd March.

This basically means that nobody can currently be sure what rate will finally be applied to installations commissioned between 12th Dec and 3rd March, other than that the 2 possibilities are 21p or 43.3p (for under 4kWp systems).

Leeds Solar are therefore advising all our customers and potential customers to only go ahead with an installation if they would be happy with the returns at the 21p rate, and to view the potential for their installation being eligible for 43.3p as being a bonus that may or may not happen.

We had already cut our prices by 20-25% since December prior to this confusion to ensure our customers could look forward to good rates of returns on their investments even at the new 21p FIT rate, so an installation now makes good economic sense regardless of the eventual outcome of this court case.

How likely is it that the High Court would rule against the Government and the new 3rd March date would apply?

Fairly likely in our opinion. The Judge in the original trial advised the government that any appeal stood little chance of success, although there is always a chance that the High Court will view things differently.

Is there any chance of the Government cutting the FIT rate further than 21p if they win the court case?

No. At least there's no chance that the Government can cut the rate further before 1st April, and DECC have confirmed this both in their statement today, and in earlier statements. It would also be entirely illegal if they tried it.

What is likely to happen from 1st April?

We anticipate that the Government will add some form of energy efficiency requirements to the FIT scheme for Solar PV as suggested in the consultation document. This would make it harder for many houses to get the highest rate of FITs if they don't meet the energy efficiency requirements. However, they will still be eligible for the lower FIT rate, and our analysis shows that this could still be a viable option in some circumstances.

We think it's quite likely that DECC will be able to apply the 8% cut that was originally planned for 1st April on top of the cut to 21p without needing to conduct further consultation, or notify parliament of this change, as it is already built into the original legislation. Even if we're wrong about this, it's almost certain that there will be a further cut over the next few months.

What would Leeds Solar advise people to do?

We'd strongly advise anyone who's already received a quote from us to contact us as soon as possible to book an installation slot before the 3rd March without waiting for the court decision. Anyone who's not already had a quote from us should fill in their details on our request a quote section as soon as possible. We will produce you a quote as soon as we can, and will probably be able to fit some additonal installations in during this period.

If you decide to go ahead before 3rd March, the worst case scenario will be that you end up with the rates of return which we've quoted, which are mostly in the 7-10% range, with the possibility of this rate of return increasing to something in the region of 15-20% if the High Court rules against the Government.

Can Leeds Solar guarantee to complete and register our installation before 3rd March?

In short, yes. If we confirm that we accept your installation for a pre 3rd March installation date, then we guarantee that it will be installed and registered before that date.

In the period before 12th December deadline, Leeds Solar completed and registered all our contracted installations with 3 days to spare. We have an experienced dedicated office team to process all the paperwork required, and if needed can have 3 experienced installation teams working at once. We also have a warehouse big enough to store as much equipment as might be needed, and have already stocked up on much of the equipment that was in short supply in December in anticipation that this announcement could be made.

As of 20th January, we currently have plenty of spare installation capacity in February, but anticipate that this will fill up rapidly once news of this announcement spreads, so would encourage anyone who wants a slot to get in touch as soon as possible. We will attempt to update this page as our installation slots fill up.

What are all the planned new rates?

Isn't there something about installations being eligible for 43.3p until April?

Where can I get more information about the announcement?