Jul 27 Posted by Guest in Feed In Tariff 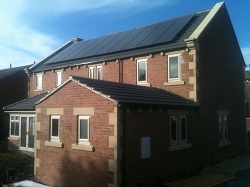 Following weeks of confusion and uncertainty over the period over which DECC was planning to calculate the installation figures for the preceeding 2 month 'quarter', DECC quietly slipped out the quarterly figures on 24th July.

This release shows that DECC is actually using the 3 months of April, May & June to calculate the figures, so the low installation rate in April as much of the country was still under winter conditions, has dragged the quarterly installation figures just under the lowest degression point for all sectors.

This means that there will be no reduction to the Feed-In Tariff rates paid to new installations this autumn as had been widely feared, meaning that the UK solar PV industry can look forward to 5 months of relative stability til the end of the year to build on the growth we've experienced in recent months until the end of the year. 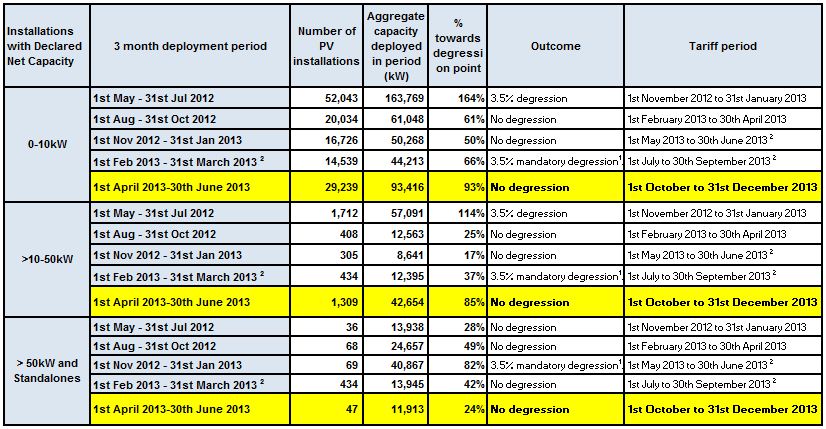 To qualify for Feed-In Tariff payments at this rates all installations must meet the following criteria; have an EPC rating of A-D, or not be connected to a building that has any heating or cooling (eg a barn), be connected to an existing metered supply, be installed and certified by an MCS certified company (up to 50kWp), and the system owner must not already own more than 24 other solar PV systems. Lower rates would apply if any of these criteria aren't met.

Sowing the seeds of confusion

The major cause of confusion and uncertainty over this degression stemmed from the previous quarter being defined as a 2 month quarter (in order to bring the FIT quarters into line with the financial year), and lack of clarity over whether this next quarters FIT degression would be based on the 3 months from April, or only the 2 months that actually formed the 'quarter'.

Had it been based on the latter, then the adjusted figures would have seen a 3.5% cut for both the 0-10 and 10-50kWp FIT bands as the installation rate picked up significantly in May and June.

We would urge DECC and Ofgem to please clarify such sources of confusion in future as early as possible to avoid mixed messages going out to the industry and public.

Leeds Solar hope that this news, along with the apprent resolution of the EU vs China solar PV trade dispute will enable the UK solar industry to get back to what we're best at, and break the 3GWp installed capacity barrier by the end of 2013.

This will be a massive achievement for an industry that was still little more than a cottage industry just 4 years ago.

For our part, Leeds Solar have now taken commercial installation orders for the Autumn that indicate we are on track to beat our 2011 figures for the total capacity installed in 2013, as our partnership with SolarWorld is proving a success.

UK solar bouncing back in 2013